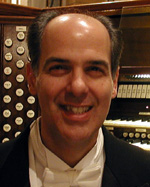 •Began the Cathedral Basilica Choir
•Re-instituted the Archdiocesan Choir of Philadelphia
•Founding Director, Archdiocesan Girls Choir
•Founded “Concerts at the Cathedral Basilica”
•Established the Cathedral Basilica Academy offering training in Sacred Music
John Romeri was the named Director of Liturgical Music for the Archdiocese of Philadelphia in September of 2010, a position that includes the position of Director of Music and Organist at the Cathedral Basilica of SS Peter and Paul. He presently conducts three choirs: the Cathedral Basilica Choir he reestablished the Archdiocesan Choir of Philadelphia and founded the Archdiocesan Girls’ Choir. He created Concerts at the Cathedral Basilica and serves as the Artistic and Executive Director.From 1992 – 2010, he was the Director of Music and Organist of the Cathedral Basilica of Saint Louis. Additionally, he served as Director of the Office of Sacred Music for the Archdiocese of Saint Louis and as the Artistic and Executive Director for Saint Louis Cathedral Concerts. For fourteen of those years, Dr. Romeri served as the organist for the Saint Louis Symphony. Prior to going to St Louis, he held similar positions at both the Church of the Assumption, and at the Diocese of Pittsburgh, both in Pittsburgh, Pennsylvania. He served as an adjunct professor at both Duquesne and Carlow Universities.
Dr. Romeri earned a Bachelor of Music degree in Organ Performance, Magna cum Laude, from the Conservatory of Music, University of the Pacific, Stockton, California, and a Master of Sacred Music degree from Westminster Choir College, Princeton, New Jersey. He also holds the Choirmaster and Associate Certificates from the American Guild of Organists. In 1998, he was presented an Honorary Doctorate in Humane Letters from Lindenwood University in Saint Louis.
He has served as chair of the National Association of Pastoral Musicians’ National Board of Directors and was named “Pastoral Musician of the Year” by that organization in 2003. The Missouri Choral Directors Association voted him the “Outstanding Choir Director for 1998- 1999,” the same year he was the coordinator and conductor for the Papal visit to St. Louis. He is a past Dean of the Saint Louis Chapter of the American Guild of Organists. He is the immediate past Vice-President of the National Board of Directors of the International Student Choral Organization of the Catholic Church, Pueri Cantores. In 2010, Dr. Romeri and his wife Karen were honored by the Saint Louis Chapter of the American Guild of Organists with their highest distinction, the Avis Blewett Award, for their significant contribution to the musical life of the Greater Metropolitan Saint Louis Region. He is the current Dean of the Philadelphia Chapter of the AGO. John serves on the Liturgy Committee of the Basilica of the National Shrine of the Immaculate Conception in Washington, D.C. In May 2015, at Commencement Weekend, John received the Westminster Choir College Alumni Merit Award for “distinguished contributions to the Field of Sacred Music.”
John is a Commander with the Order of St. John and a Knight Commander in the Equestrian Order of the Holy Sepulchre of Jerusalem. John and Karen Romeri have two children and four grandchildren.
Dr. Romeri left the archdiocese in June 2015.

THE CHOIRS UNDER DR. ROMERI 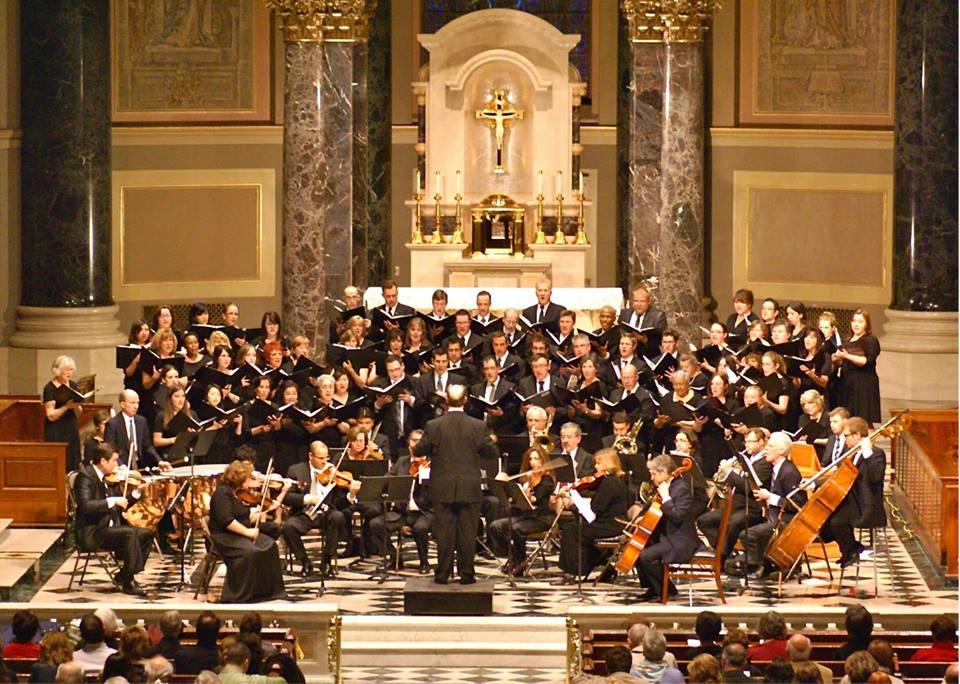 The First Archdiocesan Girl’s Choir year, 2011-12.  They participated in a Pueri Festival in Washington, DC 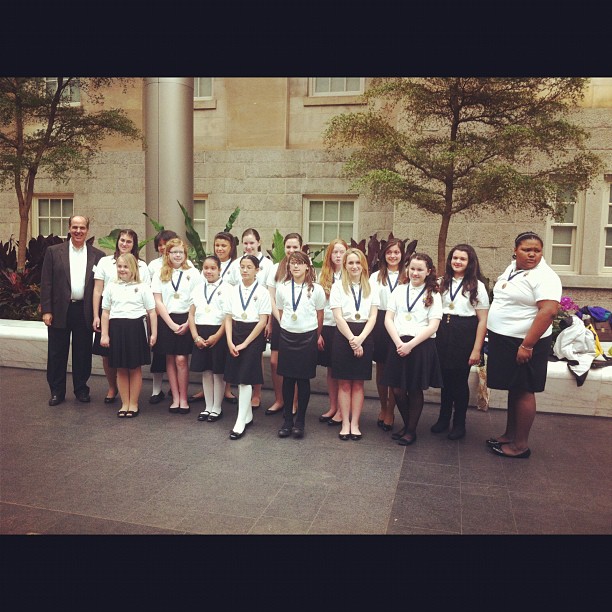 From the Choir Lofts of Paris, a concert by the Archdiocesan Choirs and Cathedral Choir, June 2013 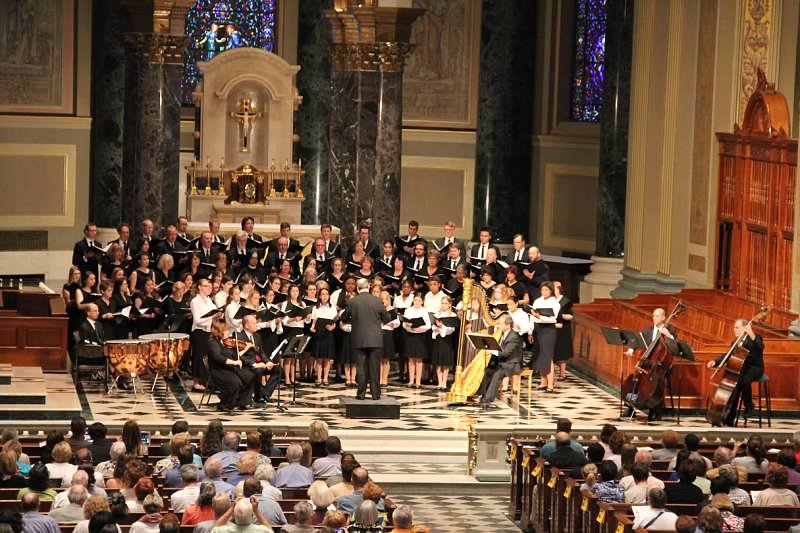 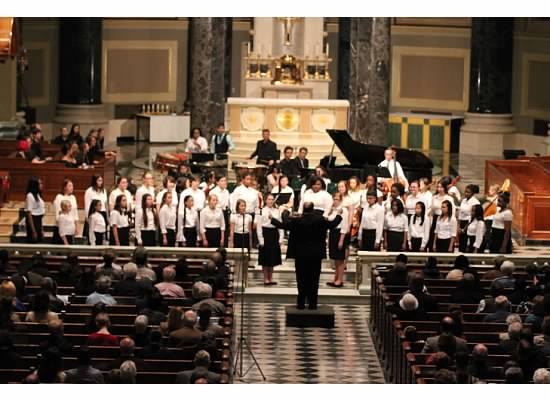 Stephen Paulus, To Be Certain of the Dawn, performed with the Choirs of Bryn Mawr Presbyterian Church, Jeffery Brillhart, Conductor 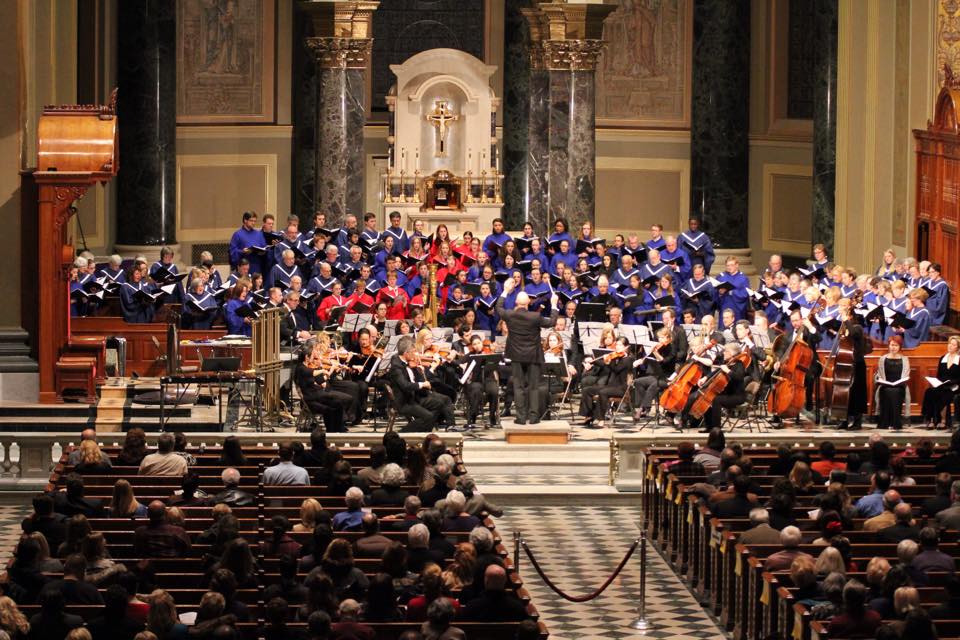 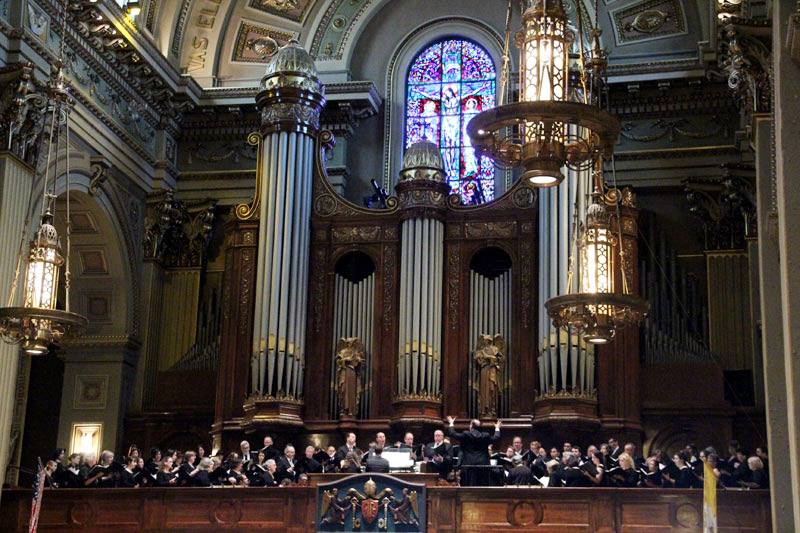 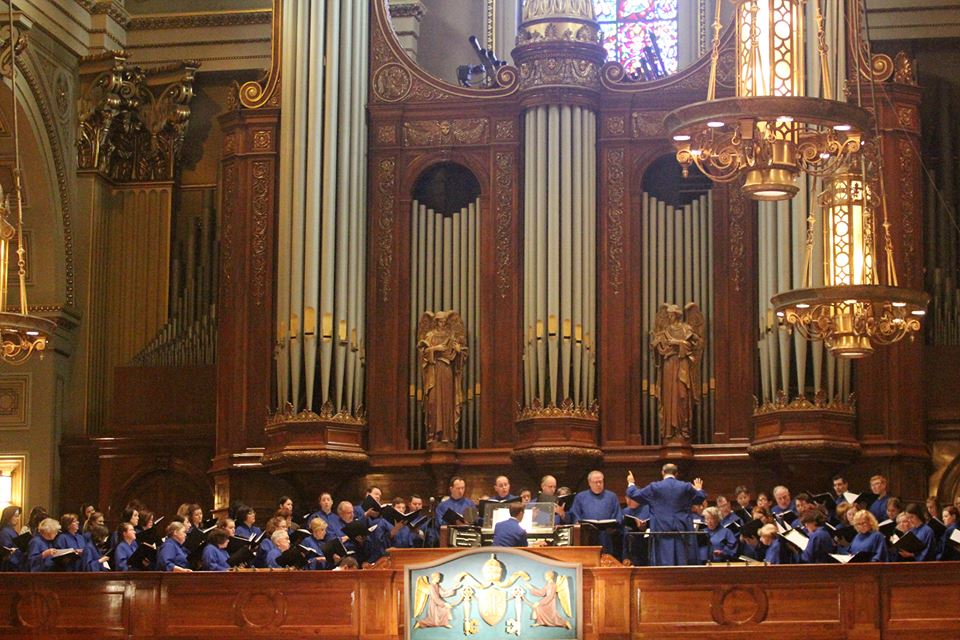 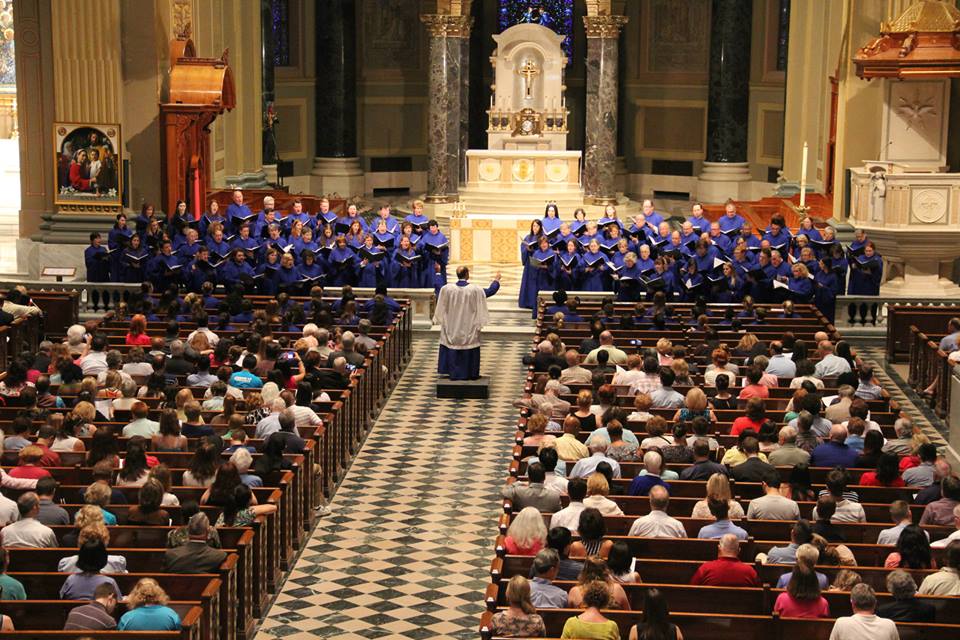 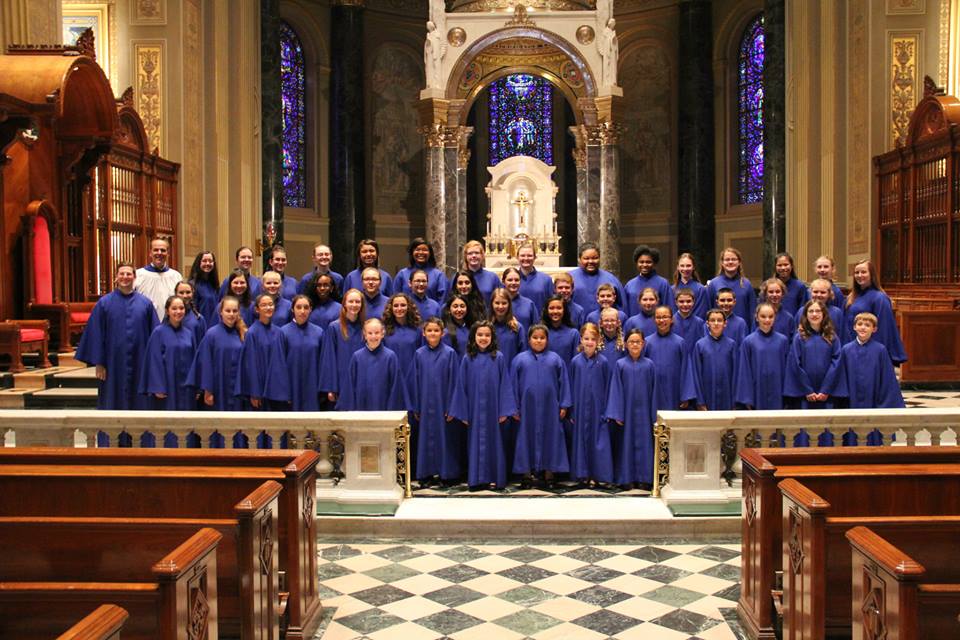 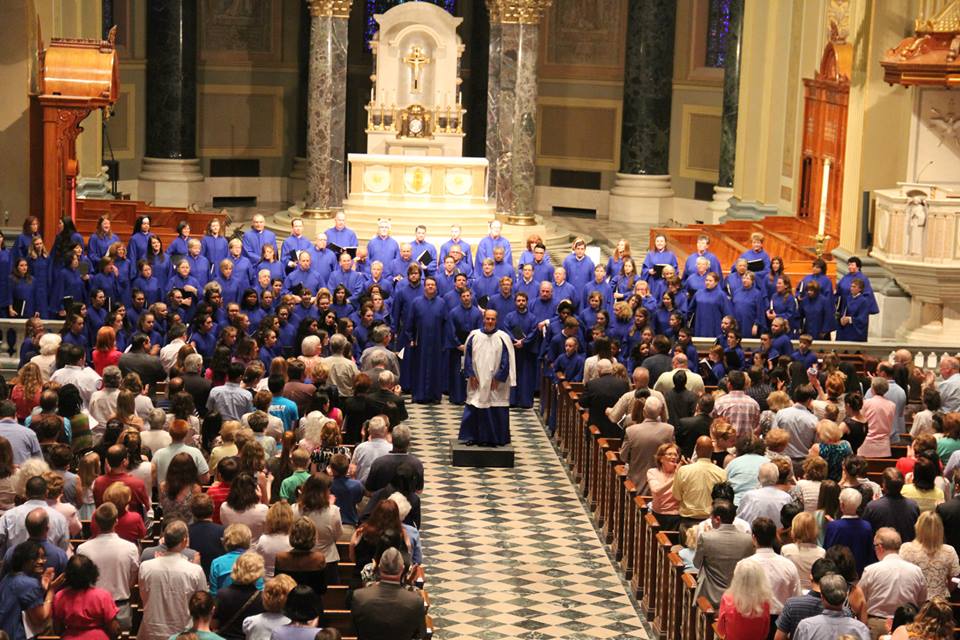 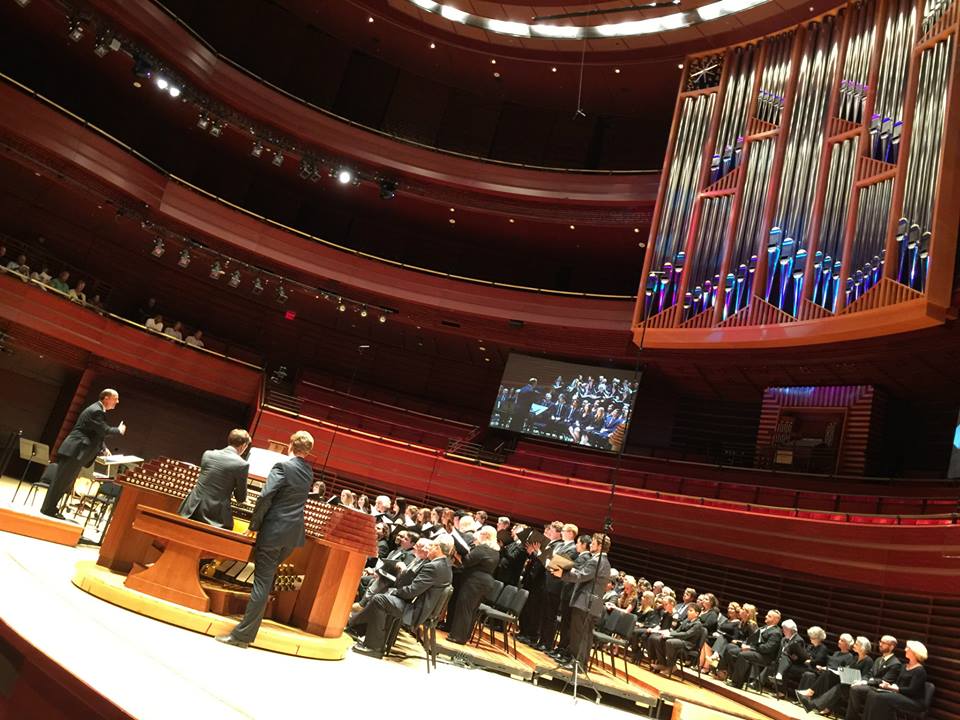 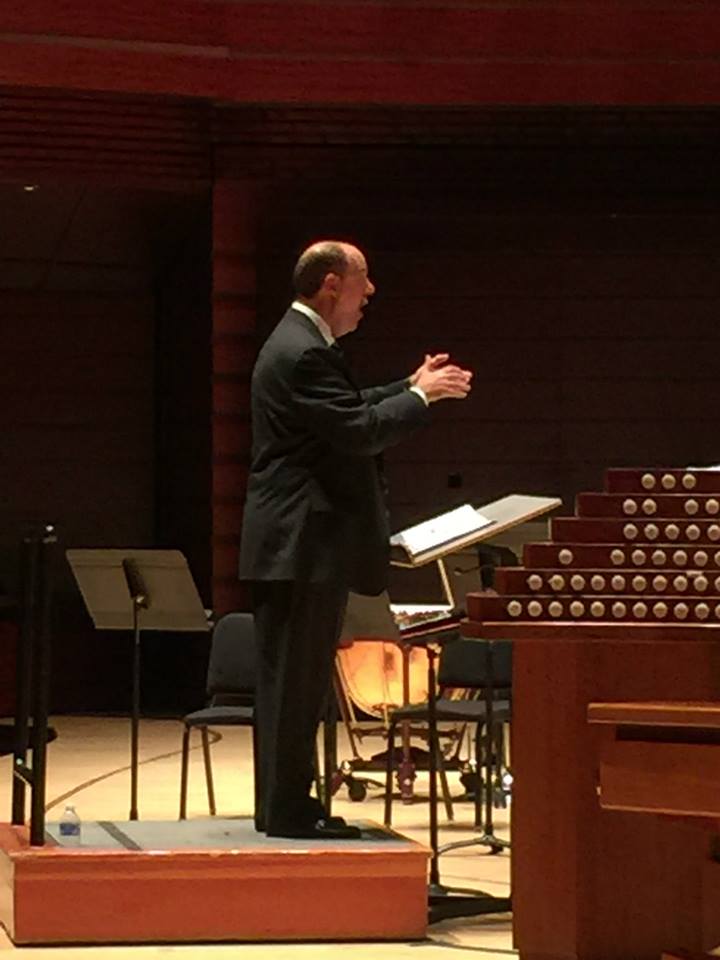 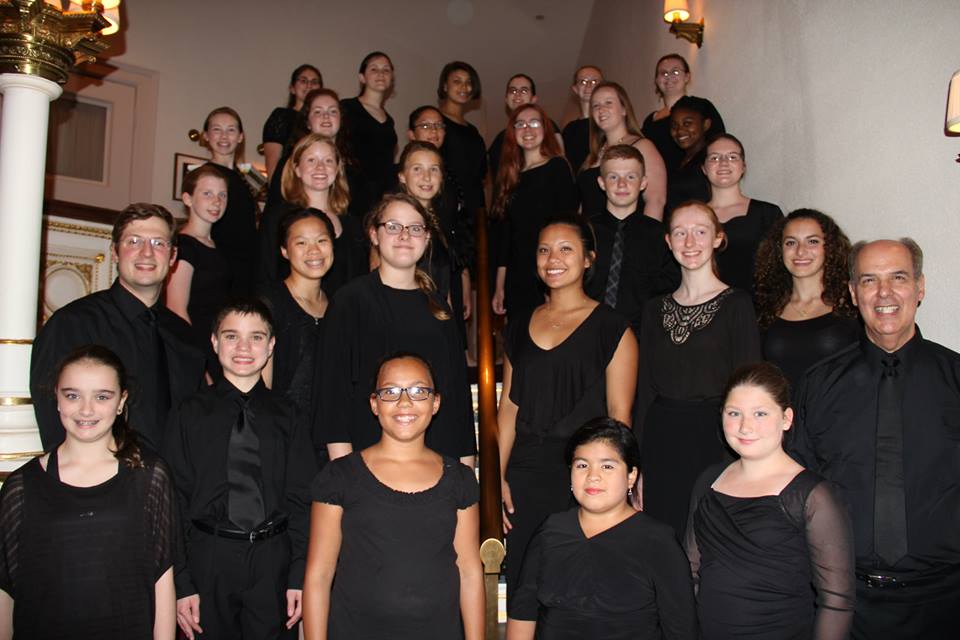 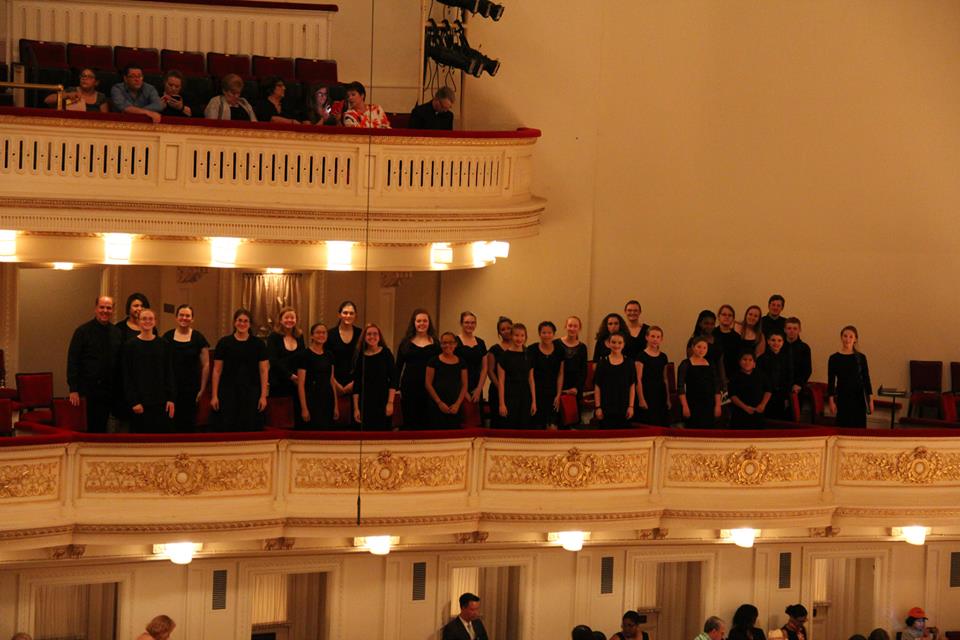 Dr. Romeri established annual Musicians’ Convocations.  In 2011, there was a gathering of Musicians with Cardinal Rigali for an Evening Prayer followed by a Town Meeting on the revision of the Roman Missal.  In 2012, there was a Choral Festival with English Composer, Philip Stopford, and in 2014, an Evening Prayer for the 150th Anniversary of the Cathedral Basilica, Reunion of the Collegiate Choir, and the first glimpse of the Cathedral Music History Project.  The History Project was due to the efforts of Jean Madden, Sr. Mary Daniels and Dr. Romeri. 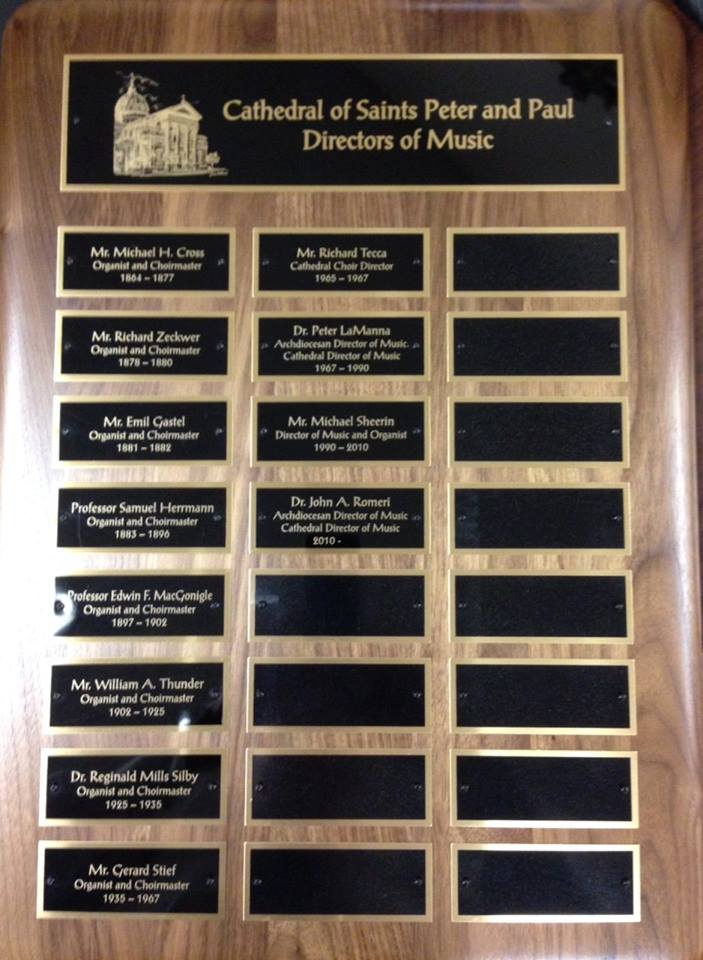 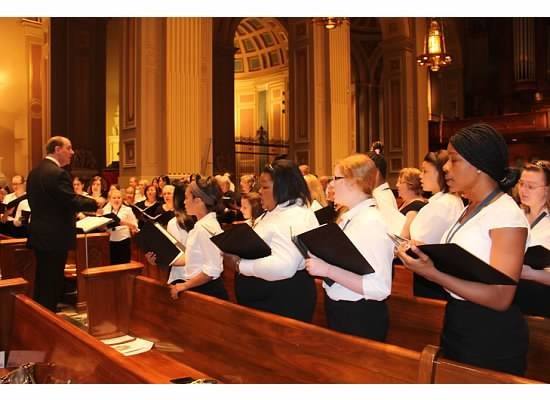 THE ORGANISTS UNDER DR. ROMERI

DR. ROMERI AS AN ORGANIST

As an organist he performed with the Delaware Symphony; performed at Longwood Gardens with his son John on Flute and performed at Boardwalk Hall in Atlantic City with his former student David Ball. 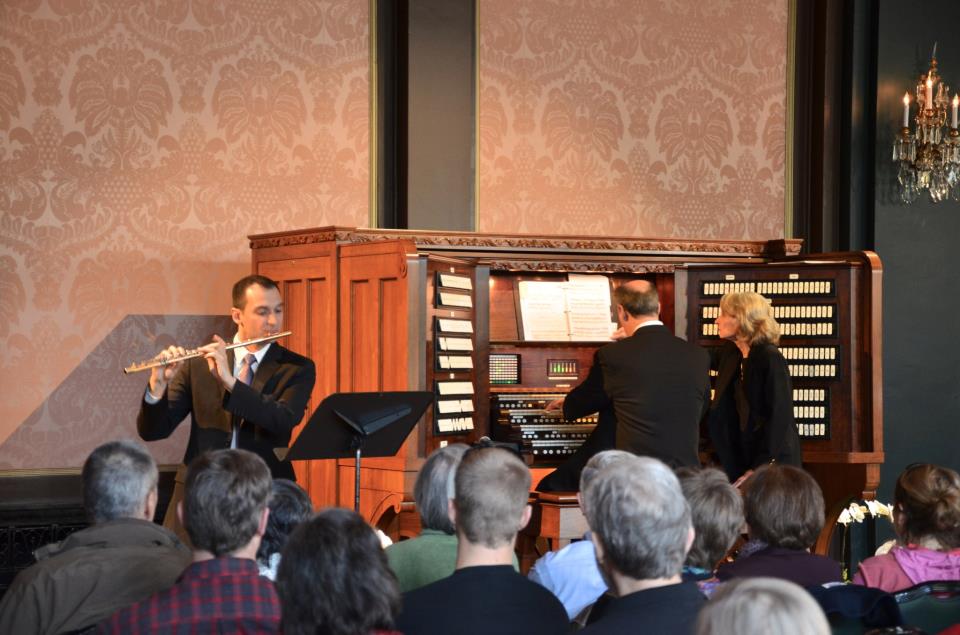 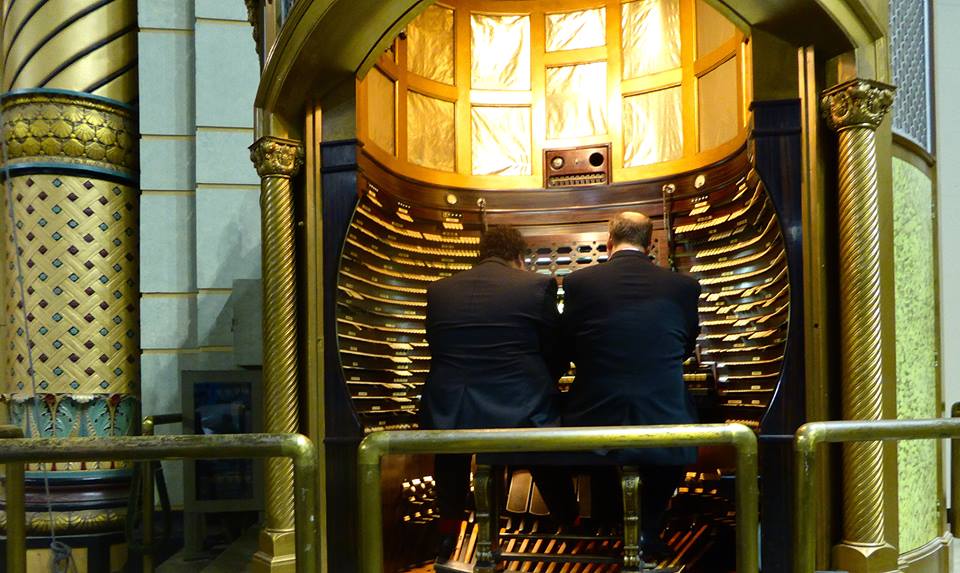 During his time as Director of Music for the Archdiocese, he became a Knight of the Holy Sepulchre.  He is pictured after the ceremony at St. Patricks Cathedral with Cardinal Rigali and Cardin Dolan.  Dr. Romeri worked with both Cardinals in his position in St. Louis. 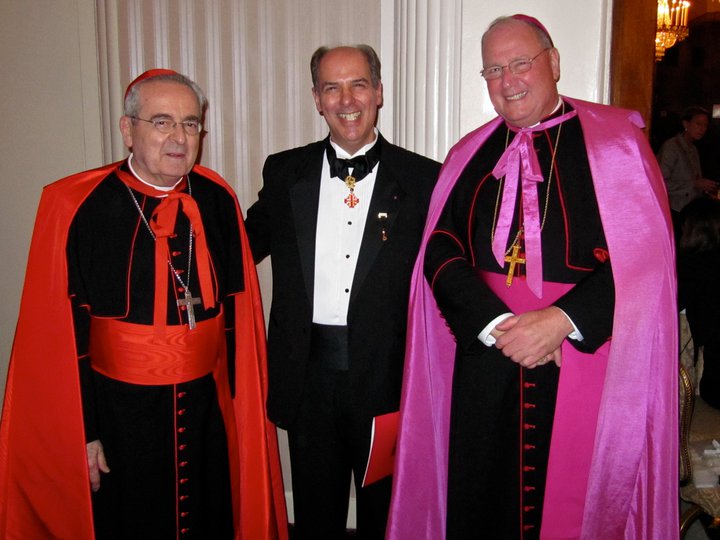 In May of 2015 he was awarded the “Alumni Merit Award” from Westminster Choir College. 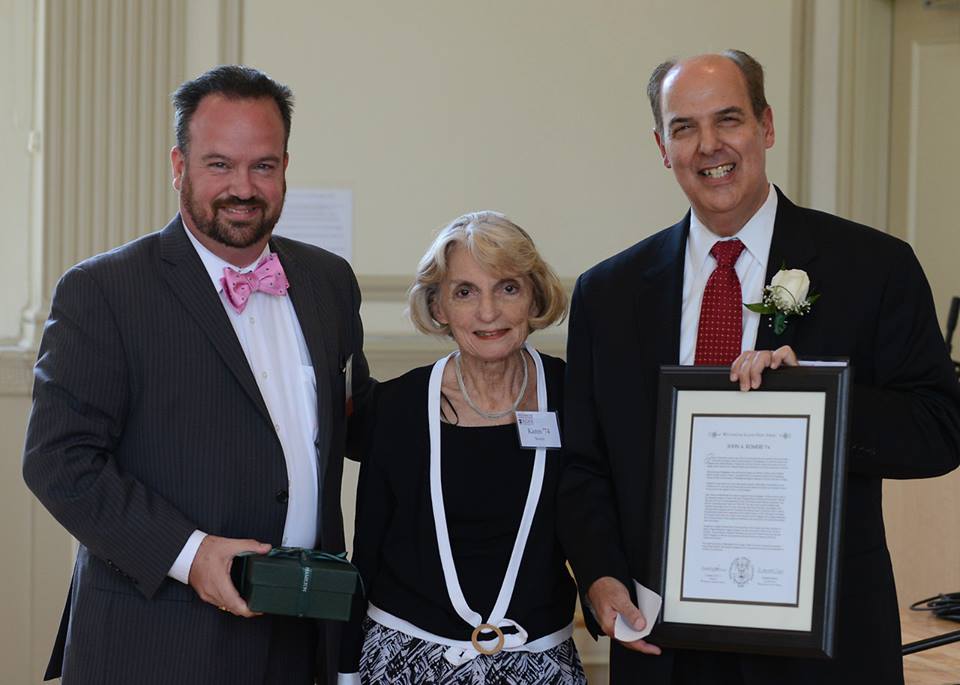